How to cope better with anxiety

Anxiety is a very uncomfortable feeling but it is there for a purpose. It is a way in which our mind tries to protect us from danger, a danger that is real, but also a danger that it is perceiving. The moment we are in danger survival is the most important thing. And that is why anxiety is such an overwhelming feeling because, in that moment, our mind is focused on: how am I going to survive? And it does this primarily in three ways. It can go into flight mode. In flight mode we try to run away from the danger. It can also go into fight mode. And this is where our mind focuses on how I can fight against the dangers that I am perceiving. The final mode is freeze. This is where we are blocked, where we become numb, where we freeze, actually, in the face of danger. All of these mechanisms are there to try to protect us. But, as I mentioned before, the mind does not distinguish between whether it’s a real danger or something that I am imagining is a danger. It will immediately switch into these modes.

So what can we do to try to decrease this sense of anxiety? The first way is actually to, in a way similar to the fight mode, activate our bodies, to activate ourselves. Do something. For example, go for a run, do some exercise, do something with your hands, do some crafts. This is a way in which you let off steam, take away the pressure, and allow your body to move, rather than stay in the freeze mode.

Another way, a second way, in which we can deal with anxiety is to try to find ways to relax. A simple one can be focusing on our breathing. When we are anxious our breathing is a bit shallower, it is a bit faster. So by trying to slow it down a bit, to allow it to go a bit deeper into our bellies rather than just stay at the top of our chest, in that way, we can give a signal to our brain using our body, telling it that it can actually calm down. But there are also other ways in which we can use our body to relax. Touch, is a very good example. We can caress very gently the palm of our hands and focus on the change in sensation, the change in texture, the temperature change, and the pressure change. But we can also find other ways to relax. We can just say: Let’s watch a movie or play some kind of game that engages our concentration, like Sudoku for those who are more into maths. These are all ways in which we focus on what we are doing in the present, which is exactly the opposite of what anxiety does because anxiety takes us into the past or the future.

A third thing that we can do is to focus on what is likely to happen, rather than what is the worst case scenario, which is where anxiety takes us to, usually. But being a bit of a wiser version of ourselves, it’s trying to put things a bit more into perspective.

The final way to deal with anxiety, and this can sound actually very weird in a way, is to allow yourself to accept that you are feeling anxious. Very often we become anxious about feeling anxious because we perceive anxiety as a threat in itself, because it signals threat. And because it is an uncomfortable feeling, all of our body, all of our mind, are engaged in trying to run away from it. Actually, feelings pass, emotions pass. And so, by allowing ourselves to stay with that anxiety, we will teach our mind that we will survive this. Although it is a very uncomfortable feeling, it will actually pass. And so, by doing so, it becomes less of a threat every time that we start feeling anxious. Of course, this is not magic, which means that there will be times where these things will not work because you are very much overwhelmed. But the fact that it doesn’t work sometimes doesn’t mean that it doesn’t work other times. And so the moment it works, the moments it works, it actually helps us to decrease the overall sense of feeling anxious.

So to summarise, the four things to help us deal with anxiety are: Activate your body, find something to relax and engage in the present, put things into perspective rationally, and allow yourself to feel anxious as an observer without constantly being engaged in it. How to relax when confined indoors

Being indoors for a long period of time can lead to a blurring of boundaries between things that we do. For example, if we’re working, living, relaxing in the same space, it will be very Read more… How to nurture your relationship in times of lockdown

Spending more time together in the same space with your partner can lead to a change in dynamics. You might feel that you’re feeling a bit more upset, or a bit more irritated with your Read more… 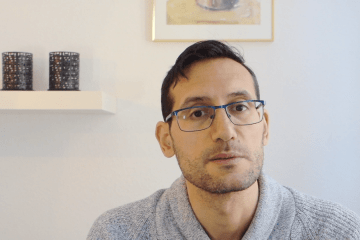 How to sleep better

Having heightened anxiety around us will lead us to soaking up that anxiety ourselves. And that means that we will trigger off our threat centres in our brains and focus more on survival. And when Read more…